The award recognizes Martonosi’s outstanding leadership in recruiting, retaining, and advancing women and underrepresented minorities, and raising awareness of the importance of diversity to the computer architecture community. Martonosi has not only been a frontrunner in advocating for diversity and ending gender bias within the computer science community, but is more specifically promoting these ideas and creating a safe, harassment-free environment at conferences and academic gatherings.

“I’m really pleased and flattered to receive this award, because I view it as a demonstration of how the computer architecture research community now embraces fully the notion that broad diversity and inclusiveness help us be more impactful and vibrant in our technical work.

"When I found out about this award, and in particular, Janie Irwin nominating me for it, I got a serious burst of imposter syndrome. Because especially when I was a young researcher, it was Janie who did so much to make me feel like I could be an integral part of this research community. But if you know Janie, you know about her three word phrase: 'pay it forward.' The service I’ve done is my attempt to pay it forward. Alan Berenbaum, for whom this award is named, is another great example of that. He gave to this community in what seemed to be a family way, helping people out and giving of his time.

"And so here I am, trying to emulate people like them, trying to pay it forward. The work on diversity and inclusion in this community is a huge group effort with tons of people working actively and supporting each other in the goal of making Architecture a research community that welcomes and leverages the talents and energy of all who want to contribute. The technical opportunities and challenges we face are too large to do otherwise.

"In some ways, Architecture now leads Computer Science in important diversity and inclusion issues. Fifteen years ago, with support from NSF (National Science Foundation) and CRA-W (Computing Research Association’s Committee on the Status of Women in Computing Research), Architecture hosted the first so-called discipline-specific workshop to help young women and underrepresented minority students choose this topic area for graduate studies, and succeed at it. Many of you came to Princeton for that workshop, either as speakers or as student participants. Now many computer science topic areas are organizing these workshops, often as pre-conference events, and architecture was the leader.

"Likewise, a couple years ago, we led efforts to insure that the conferences in our research area were technically inclusive and safe for all to attend. Since then, the architecture community’s efforts have encouraged ACM (Association for Computing Machinery) to do more data gathering on the demographics of conference attendees and presenters, because as scientists we know we need to measure things, in order to know how to improve them.

"And Architecture led ACM in the creation of the CARES group (Committee to Aid REporting on discrimination and haraSsment policy violations) to offer trusted sounding boards as resources at our events. The CARES idea that started within this community --- the red badge ribbons you see several of us wearing at the conference. That is now a template with other SIGs (special interest groups) forming CARES groups as well.

"Speaking personally, this award is meaningful for me for a few reasons. First, Alan Berenbaum was a co-author of mine, a colleague, a role model, and a friend. Receiving an award named after him brings back happy memories of a really good person. It means more than I can say.

"Second, and harder to put into words: Fundamentally, I am a quiet person. I like to work with my students. I like us to do our science, I like to let our science speak for itself. You rarely see me at a microphone asking questions after a talk. So when I spoke out on behalf of the community two years ago, it was a personal stretch for me. So why did I do it? It was about the fact that I had learned how to function in this community, but I often didn’t feel like I fit in. Even more so, I knew that younger folks than me would be finding things even more challenging, because they wouldn’t have yet had the time to build up a track record that could speak for itself.

"Finding my voice, finding our voices over recent years has been positive. To me, it has been like that moment in the classroom, when a student gets up the nerve to ask a question in a big lecture, and then realizes that most of the class had the same question. Things are less scary when you realize how many others are there with you. Where many of us had been feeling like outsiders in isolation, we now realize how much we all have in common as a research community. It’s that shift towards making the community a community that has been so personally meaningful. In particular, making sure that people like you and you and you and me all feel like we belong. We as a community are not perfect and we’re not done yet. For example, all-male panels are still way too common. But we’re learning together and we’re learning how to leverage all the skills and talents we have in this room.

"This was and is a group effort from many in the community. I thought about listing thank yous but any list would be incomplete; the group is just too big. I’ll give you an algorithm though—start with Natalie and the amazing women of wicarch and iterate from there.

"So let me instead thank you all, as a community, for being the sort of world-leading innovators that you are. For innovating both on the technical issues in specific, and also on the intertwined and equally important issues of access and inclusion in that technical research.

"And let me end as I know Janie and Alan want me to, by reminding us all to pay it forward! Thanks!" 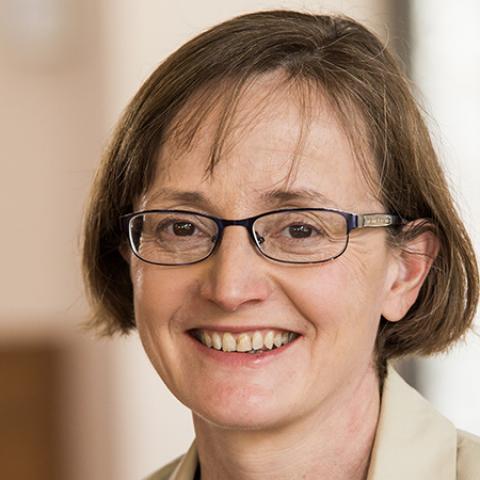