​“Engineers do not design products.” That bold statement was made by Professor Richard Buchanan to a gathering of researchers and innovators attending Princeton University’s 12th Annual Innovation Forum on February 15th. As the keynote speaker, the Case Western Reserve University academic challenged the audience to embrace “design thinking” in product innovation, while also advancing its’ use in other areas such as organizational and management design.

His talk, entitled “Design, Value Creation, and the Products We Love,” is timely to the transition underway at Princeton, which is re-crafting its academic program to embrace innovation, entrepreneurship and ‘design thinking’.

Princeton Professor Derek Lidow, who’s spearheading the introduction of ‘design thinking’ at the university, introduced Buchanan. Lidow highlighted Buchanan’s long academic career as well as his record of tackling daunting challenges – Australia’s taxation system and the U.S. Postal Service, to name two. Those arduous projects complemented Buchanan’s years of study and research, and partially served as proving grounds for his concepts and methods about interaction design.

“Richard is the spiritual, intellectual, and theoretical thought leader of the design thinking group that has coalesced in the last 25 years,” stated Lidow. “He’s well known for extending design into new areas.”

Buchanan is leading the interaction design field forward, and his article, “Wicked Problems in Design Thinking,” is considered one of the founding documents in the field of design.

Buchanan’s work on design and innovation goes back to the early 90s, having spent many years at Carnegie Melon where he was the Dean of the School of Design. He moved to the Weatherhead School of Management at Case Western, however, because he felt designers weren’t receiving an adequate education on how organizations work.

“There was a missing element in how we were preparing designers to work in the world,” said Buchanan.

Building posters and toasters is nice, he said, but he wanted to help students better understand how to design entire organizations and environments – a type of design he views as a “scale up.”

Buchanan considers this the fourth order of design: helping managers better understand the development of products and services, and using design as a management tool to shape the vision and strategy of organizations.

From there, he laid the groundwork for his speech to the Princeton audience by presenting the three essential elements of design.

The first: usefulness. A product absolutely has to be useful, he said, or it simply won’t sell. He invited the audience to imagine a beautiful Italian calculator featuring touch technology and color-coordinated design, yet frustratingly it yields seven as the product of typed-in two times two, exemplifying the limitation of its usefulness.

The second: usability. A product has to fit in the hand and mind of the people who use it, and professionals turn to marketing and even cognitive psychology to understand what makes a product usable.

He defined a product as desirable if people are willing to bring it into their lives, identify with it, and feel comfortable with it. Identifying a product’s desirability takes a lot of an engineer’s time.

“Finding a balance among those three factors is what makes a successful product,” he said.

He then went on to qualify his earlier claim that engineers don’t design products. In a room full of engineers, he strove to have them understand the complexity of designing a successful product.

“[Engineers] design logical workings of products, but only on accident do you stumble on products,” he said, thus emphasizing the entire process of a product’s design, from the concept to the idea to the execution. Buchanan’s point being: a successful product relies on many factors external to the engineers who build it. Key is meeting the requirements of usefulness, usability and desirability.

Buchanan also contrasted the study of design with other university disciplines by saying it’s “one of the few disciplines that has no subject matter.”

“If you’re in chemistry, you know exactly what you’re dealing with. Same with physics, biology, anthropology and most others,” said Buchanan. “But design has no subject matter, and that can be a scary enterprise.”

Therein lies design students’ core challenge: their subject matter is the “possible,” as Buchanan put it. “Only what could be.”

He even considers design to be the modern day liberal arts in the sense that in traditional liberal arts study, one learned ways of applying thinking across a range of subject matter instead of being subject matter itself. Today’s liberal arts is a subject matter, while those engaged in design are still striving to develop those lines of thinking.  With progress, design cuts across disciplines, bringing it into a wider array of industries. This progression, Buchanan strongly advocates.

Because this discipline is emerging, many are formulating the meaning and approaches involved in “design thinking”. Buchanan, however, boils it down to having the ability to ask the right questions.

“Finding those questions will be one of the challenges for the Keller Center down the road,” said Buchanan. “What are the questions that cut across subject matter specializations that give power to make students able to move forward and have social impact?”

Ultimately, Buchanan encouraged the Keller Center to reach out across campus and understand other disciplines –as well as the useful, usable, and desirable in every industry – as keys to their success in moving forward. 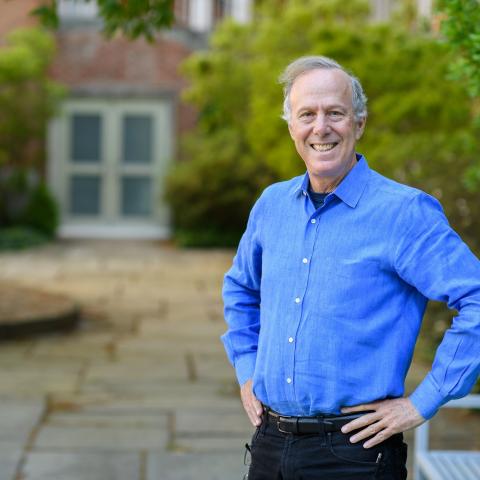