Ro Gupta ’00 is the founder of one of Keller Center’s Princeton Startup Immersion Program host companies.  We caught up with him recently after wrapping up his third summer with the program.

KC:  Can you give us a brief update on what you are doing now?

RG:  I am a cofounder and CEO of CARMERA. We provide street intelligence in the form of high definition "living" maps to autonomous vehicle (AV) customers. Just about 100% of AV programs today rely on these highly accurate, constantly updated 3D maps to help them know where they are, what they are seeing and where to go next. We also provide a fleet monitoring IoT service for delivery vehicles to help us collect data to keep our maps fresh, and we share some of our safety and planning data with cities and governments in the spirit of private-public collaboration.

KC:  How far is that from what you intended to be doing when you were an undergrad?

RG:  In some ways quite far. I don't have that mythological story about being some kind of tinkerer in my dorm room or dropping out of school to go start a company, and I remember as an undergrad mainly just being worried about getting a solid first job (ended up being management consulting), paying off debt, etc. I don't think I fully gained the conviction and financial confidence to want to start a company till a decade after I graduated, but I definitely got some early bugs in my ear from Princeton classes I took with faculty like Alain Kornhauser around forward-thinking transportation concepts, as well as Ed Zschau, the originator of Keller Center’s High-Tech Entrepreneurship course. The latter definitely inspired me to want to get out of my comfort zone at some point, while the former proved to be rather prescient about some of the realities we're seeing today in autonomous mobility.

KC:  How supportive were your family and friends when you decided to enter the entrepreneurial space?

RG:  Very supportive. A number of my family members have had success as entrepreneurs or startup employees, and even when I was quite young, I can recall my mom and dad encouraging me to pursue some little invention ideas I had had as a kid. That said, there was always this survival/fiscal responsibility mentality, at least in my head, having emigrated from India to the US when I was four, so I think in many ways deciding to do the startup thing later in life was a function of that too.

KC:  Why did you decide to participate in our PSIP program?

RG:  It was good timing -- I was approached and happened to just be starting CARMERA and at a point where it made sense to experiment with an intern program. Thankfully it was one that had some structure to it so that it wouldn't be onerous for us as a tiny startup at the time to ensure the interns got a good experience, while remaining focused on what we were building.

KC:  What have you gained from participating?  What had you expected, what hadn’t you expected?

RG:  PSIP has been such a big success for us that I almost don't want to reveal one of our secret weapons :) I think we came into with relatively low expectations since it was brand new and we weren't sure how much undergraduate engineers and computer science majors would be able to contribute in just one summer. Now with three cohorts and seven PSIP alums under our belt, I can say expectations have been greatly exceeded. There are very tangible advancements, especially in our machine learning and computer vision technology, for which you can draw a straight line to one or more of our PSIP interns. We are very grateful to that program and those students for spending their summers with us, and coming off a recent fundraise led by Google Ventures, we are actively hiring (carmera.com/join), so I hope that we can welcome PSIP alums as full-time employees as well.

KC:  What is one thing you wished you’d done as a Princeton student?

RG:  Had the nerve to try and strike up a conversation with John Nash. The closest I got was trying to cut through the Fine lawn once by jumping a chain, and tripping over said chain to realize when I looked up that Mr. Nash had witnessed it all and was laughing.

KC:  Any advice for current students?

RG:  If you are thinking of doing something entrepreneurial, it's okay to wait a bit if you don't feel it in your bones to jump right in now. Do what feels right, as long as you're optimizing for learning early on. On the other hand, it would have been nice to do what I'm doing now before having little kids in the house who wake you up at 5:30am each day ... so when you see that opportunity that does feel right, jump at it sooner rather than later, and don't worry if the initial try doesn't work. The great thing about the time we live in now is that failure is admired and often even rewarded if in context of trying something innovative and risky, even by the so-called establishment. 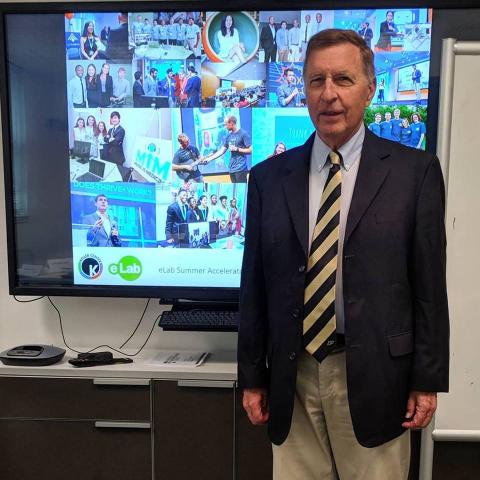